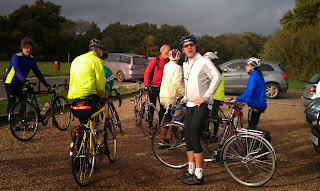 The things that a telephone can do these days!
Outside the Parrot after a nourishing lunch of mussels and home baked bread.
Quiz: Identify the shrinking violets with their backs to the telephone.
Posted by Jeff at 18:29 No comments:

A recent calamity saw me deleting(!) myself from the blog (hence the missing photos, maps, etc). So I thought it best to get straight back into action with a new id but the same alias, RaasayWarden.

I was most surprised by a phone call at 0840 so a hurried twenty minutes later at Kingston Bridge I met up with temporary visitor, Martin, from CTC Winchester. This proved the perfect excuse for blustery detours to the University, back of Sandown Park, Fairmile Lane, a watery Cobham Tilt and The Hautbois. Thus we approached Squires West Horsley from the west.

16-18 riders was my best guess though several turned back leaving Ed to tow the remaining ten along the A246, up Staple Lane and down Coombe Bottom and into Shere via the ford. Peaslake and its MTBers came next then Ewhurst where we turned left picking up a strong tailwind which propelled us to a crowded Parrot at Forest Green. Most settled for substantial though I do wonder how miles one can ride on a bowl or mussels.

Capel was but a short distance away and we arrived well before the opening hour(1500). That wasn't a problem so a now thinned down eight enjoyed cakes and tea before dispersing. Pushed along by the wind, I reached home before five (still in the light - just) after a modest 58 miles.

Posted by RaasayWarden at 09:52 No comments: 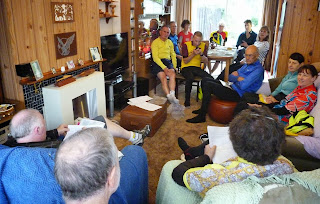 Cosy AGM with tea and cake thanks to Ed 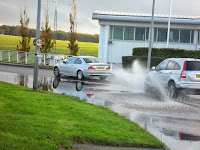 New water jump (not there in the morning) by the grandstand at Epsom.

Have your say - before 1st November

Not for the Silent Majority

Surrey County Council has published a Draft Cycling Strategy for the period 2014 - 2026:

There is also a survey/questionnaire which we are invited to complete online before 1st November. www.surveymonkey.com/s/Individual-Consulation.  This does give you the chance to say what you would like to be done to improve cycling in Surrey. Please look at it and take the time to complete it. Do not rush it as it gives you the chance to state your own views on cycling  and what might be done to encourage and develop cycling and cycle safety in Surrey. It is worth giving each question some thought  before clicking on 'continue'. Do give your views, whether it be on cycle lanes, particular road hazards, potholes or whatever.


There was no one in sight when I arrived at Kingston Bridge but joy was short lived as first Stef then Ed showed up. The consensus was continue so we splashed along my standard route to Runnymede. Perhaps I should add more or less as briefly we pay our respects to General William Roy (http://en.wikipedia.org/wiki/William_Roy). From Hampton we continued through BP and Ashford to Staines and Egham where t'others were caught at the first level crossing. Soon we were heading down Hummer Road and across the A30 to the Runnymede road. Dave W was going out as we were going but seated in the comfy leather armchairs were Irene and Pam.
The thought of continuing never crossed our minds so after a decent interval back it was with a following wind (and the continuing heavy rain). Home just after one and 32 miles.
Graham
Posted by Jeff at 18:57 No comments:

For those out next Sunday, leader Irene has notified us of a change of venue for afternoon tea. Instead of being at Savill Garden, tea will now be at The Old Staines Café. I don't know where this is, other than in Staines, but if we follow our leader's back wheel, I'm sure that it will lead us there.

Nine met at Buckland Squires for 11s but this became six after a few miles. We briefly headed west on the A25, soon turning south into Old Road. Sandy Lane led to Wonham Lane and the sight of many deer. Past Wonham Mill, now apparently expensive dwellings after years of neglect. We crossed the A217 into Lonesome Lane where the teddies watched our progress from their balcony. We rejoined the A217 to Povey Cross where we turned right towards Charlwood. Taking the Ifield Road we soon passed The Gate, our planned lunch stop but now closed and continued to The Lamb at Lambs Green. Here we dined well on child's portions which were quite adequate. After a leisurely break Terry, John G and a tub of flowers gave an impromptu demonstration of 'Domino Effect'.

A leisurely ride to Capel via the 'usual route' saw us arrive at the church at exactly 3pm - what timing ! After studying the vast display of cakes and goodies (some even purchased two!) the next most important thing was Dave's multi-bulging rear tyre. Hope you got home safely, Dave!

Overall a leisurely ride in dry, comfortable and frequently sunny conditions - how many more will we enjoy before winter ?


M&S on Sunday morning found an early queue of a resurgent Lilian and two TFBs ready and eager to go Westerham, reached by a series of ups and downs. Down to Banstead Woods, up to Chipstead, down to the A23 Hooley, up to Caterham on the Hill, down to the A22, up to Warlingham and Botley Hill before the final swoop on Westerham, where Bob and Dave were already settled in the Tudor Café. After some time off the bike, Lilian’s legs were complaining a little. With his wallet safe at home, the leader was not tempted by the pheromones of bacon sandwiches, though he welcomed a pay-day loan from Dave.

Soon it was time for the up of Hosey Hill and the down to Crockham Hill and Marlpit. From now on it was level as a billiard table as we meandered through Staffhurst, Crowhurst and Haxted, before heading for Dormansland and the Old House at Home. Warm enough to eat outside, we took a casual lunch before heading for Lingfield, Blindley Heath, Tilburstow and Bletchingley. Here Lilian’s legs insisted on a change to train assisted, while the rest continued on to Merstham and a very welcome Fanny’s Farm. After tea, cake, rest and relaxation all headed off for home, where the leader's mileometer recorded a modest 55 miles.