My plans are after 11's at Denbies,head over to Forest Green (The Parrot PH) and see them complete 3 loops (2.45pm) before they tackle Leith Hill.
I expect the pub to be really busy so don't rely on it for food, just beverages.
It's a stones throw away from Capel teas too :-)
All the info is here:

Good luck to Janice riding the London Surrey 100!
Posted by Tartan Socks(long) at 22:16 No comments:

I was suprised to see Wetherspoons open at 8.30 in the morning on a Sunday in Leatherhead but we had no time to linger and were away by 8.31 to arrive in good time at the 10am opening of Stooks cafe inside Newbridge Garden Centre at Broadbridge Heath.
It appeared to tick all the boxes for a new refreshment venue including a nice welcome from the owner and the poached egg for Janice (not on the menu).
At this point Ed called it a day admitting "I know my limits".The remaining five headed south to West Chiltington then Storrington.Still going south, up Chantry Lane to the top of the South Downs.
Confusion ensued trying to locate a track leading down to Clapham and in the 20 minutes or so this was taking, Terry left us to attend a social function.
Eventually, I opted for Lee Farm where a surfaced road led us to the A280 and over the A27 into Ferring.
Lunch (1.15pm) was at the Bluebird cafe right on the seafront where we met Bob.
I had a cappucino and the nicest iced bun I've ever had, light and airy not stodgy like most,but of course you can't please all of the people all of the time as these reviews seemed to indicate:

We left around 2.30pm to follow the coast road into Worthing and lots going on including a bus rally with a London Country Routemaster 407 which according to the indicator board used to go to Epsom via Cheam and not terminate at Sutton as they do now.
After climbing back over the downs at Sompting ,it was a fast decent into Steyning and a fast ride (courtesy of a following wind) to Southwater Country Park (4.20pm).
After tea and finding out the perils of fructose syrup we made our way home.
Upon arriving at Newdigate (6.05pm)  my legs were telling me something I didn't want to hear.
I sent the others on and I stopped and consumed a KitKat (chunky) and Milky Way (twin) in quick succession.
Early signs of the bonk caused me to additionally stop at Givons Grove garage for a sandwich.

112 miles but with a 10% discrepancy call it a ton.
Lovely summers day with a tail wind when you most need it. 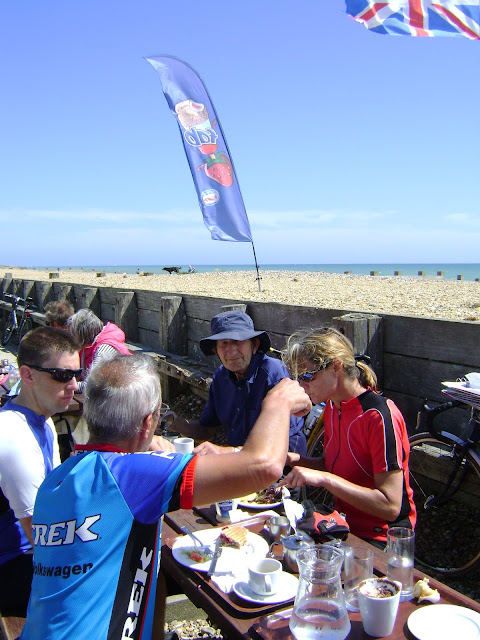 Posted by Tartan Socks(long) at 21:25 No comments: 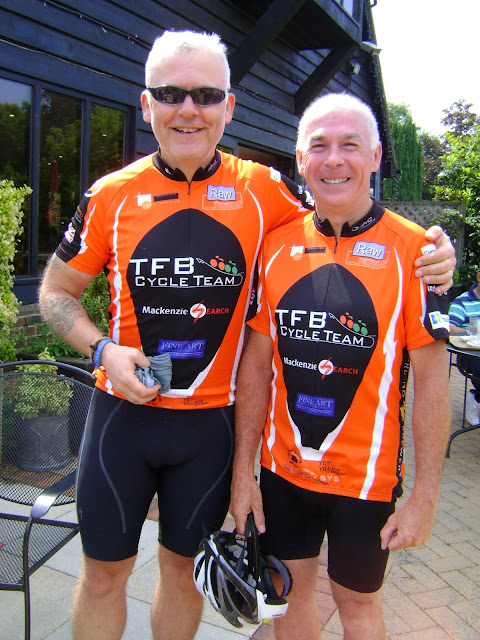 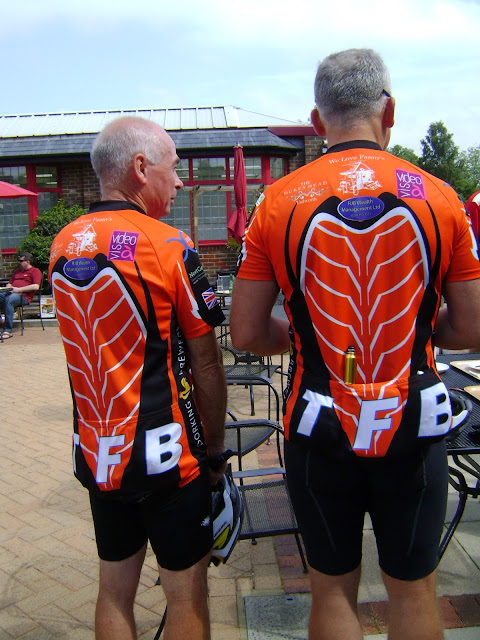 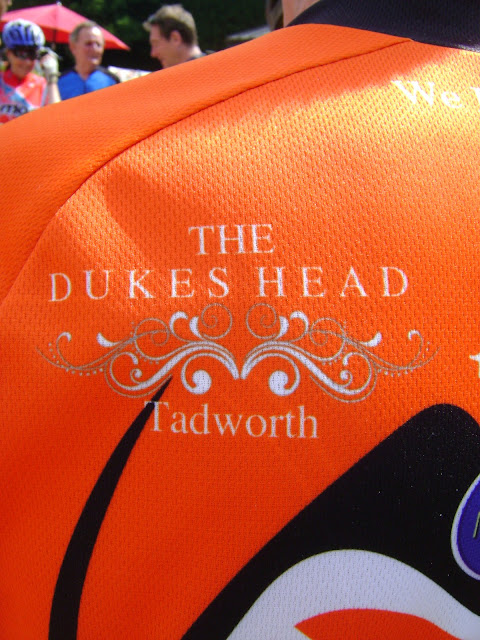 PB told a cock and bull story about riding home from Poole in a day after a trip to Normandy the other weekend.
Yeah right..........lol.

Nice jerseys though :-)
Posted by Tartan Socks(long) at 18:47 No comments:

Richard's ride today so I rode out to join five already at Haskin's in Copthorne.
No returnees,that made eight out all day.
We followed the B road south to Turners Hill then branched off toward Sharpthorne.
At Tyes Cross it was a right turn down what must be one of the most enjoyable roads in this part of the world...........freewheeling a good 3 miles.
There were frequent stops to look at the map because it turns out we were not heading for Sheffield Park (lunch) but a pub off the beaten track in Scaynes Hill.
We arrived around 1pm at The Sloop Inn..............but no acceptable food for the five not carrying lunch.
I lectured about the difficulty in finding suitable pubs but in addition I suggested that more folk bring their own than is currently the practice.
Apart from the lack of food the pub was fine (lime cordial 70p) and in a really pretty part of Sussex.
It seems a shame to avoid these places just because some prefer not to carry a small piece of sustinance.
PB asks who wants to eat a warm cheese roll that's been in your back pocket for several hours?
All I would say is it's probably better than a packet of gourmet crisps which is all your likely to get these days.
More and more pubs are going gastro because of the little profit on alcohol alone.
The Sloop Inn appeared to be several miles from the nearest house so relies on a weekend trade that are happy to pay £12 for a meal.
Tea was at Tulleys Farm,possibly still in Sussex.
Good value tea though...........pot for two £2.50............a pot for three £2.75.

70 odd miles.
Overcast but mild morning then sunny and very warm into the high twenties. 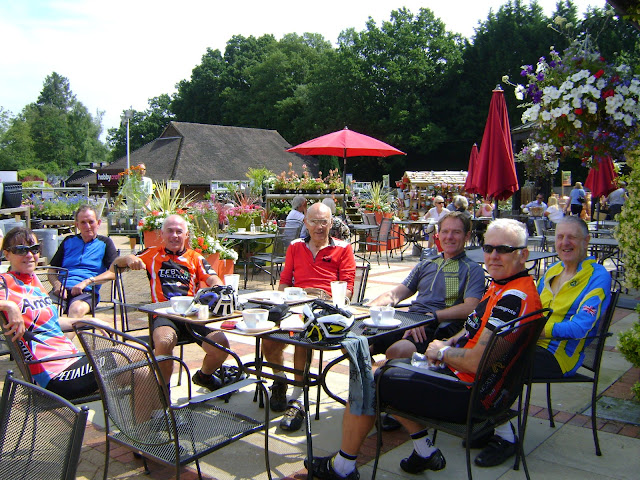 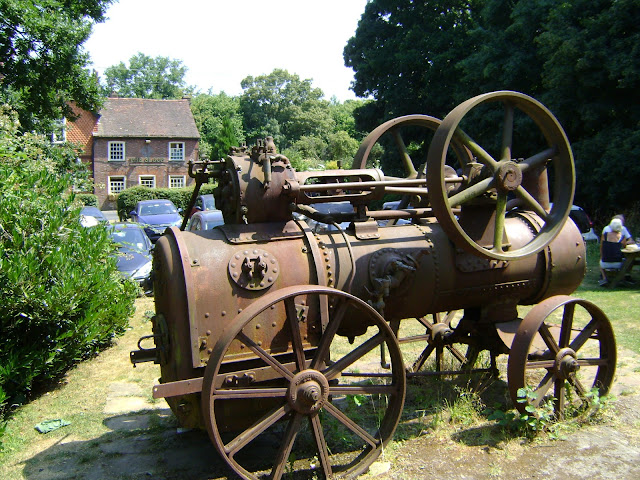 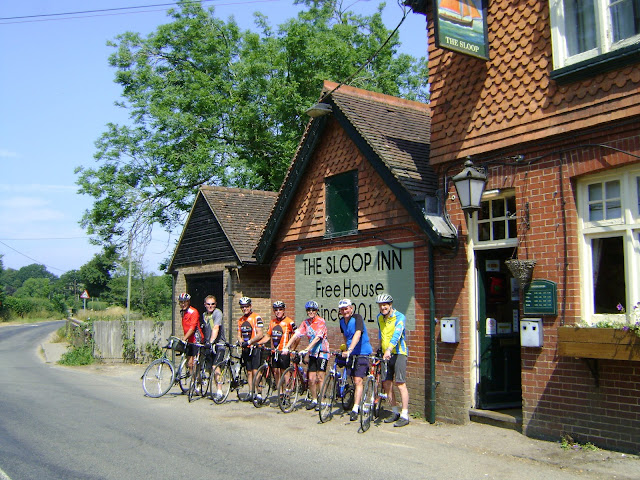 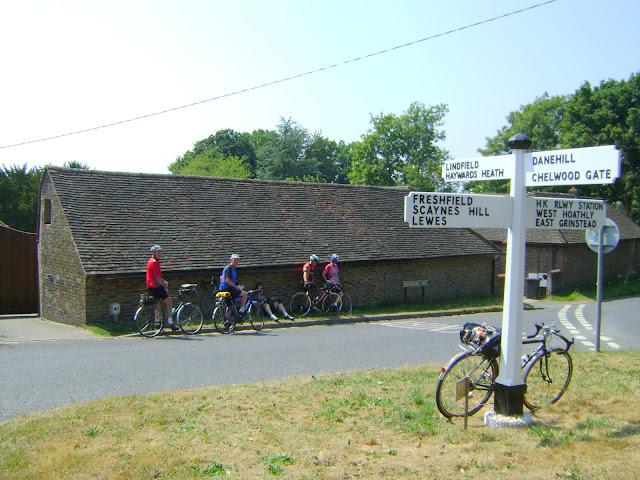 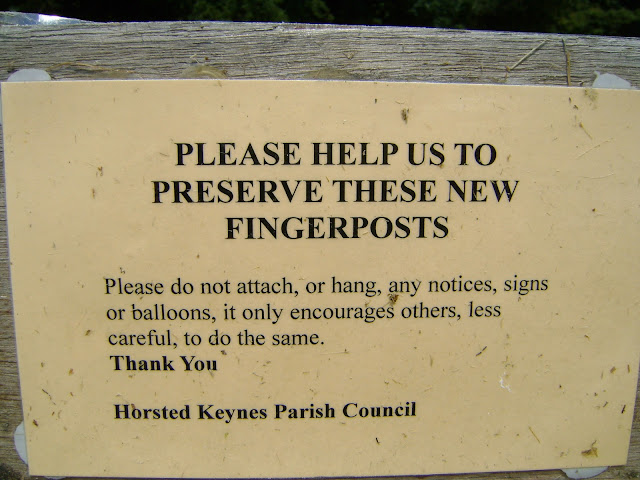 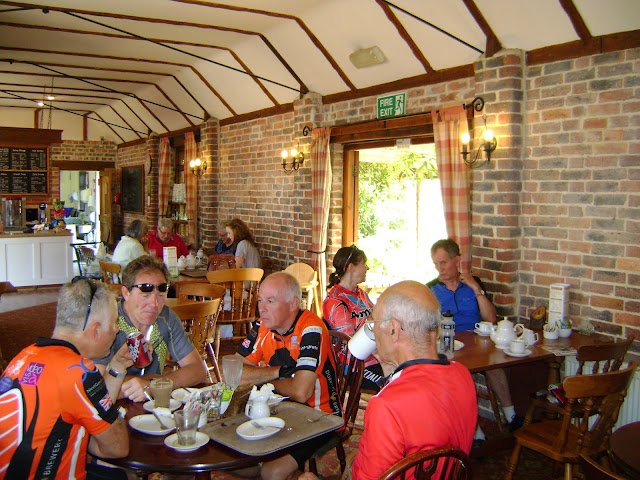 Posted by Tartan Socks(long) at 18:33 No comments:

Back at the front on a familiar route to Lullingstone via Croydon,West Wickham,Petts Wood & St Marys Cray.
A piece of mis-information at a crucial junction (from a local) meant some (unintended) off road from the golf club at Lullingstone to descend to the River Darent and the Visitor's Centre.
I can't remember the last time we were here but it looked different,certainly a new toilet block and a more spacious cafe.
Matt returned home but Dave with his brother (Duncan) joined us for a 12 mile ride south east to Plaxtol going through Shoreham,Otford,Seal & Ivy Hatch.

Plaxtol is a small village of about 1,000 residents in Kent. The River Bourne flows through the parish, and formerly powered three watermills in Plaxtol - Winfield Mill (corn), Longmill (corn) and Roughway Paper Mill.
Although there is no longer a bakery in the village, there is a primary school, a Cromwellian church, a grocer, a butcher and a pub.
The name Plaxtol is rumoured to be derived from "Plax" meaning 'play' and "tol" meaning 'area'; there used to be a large green in the middle of the village where children would play after attending church on a Sunday.
The 1,000-acre Fairlawne Estate adjoining the village of Plaxton was owned by Sir Henry Vane the Elder, in the 17th century, and was owned by the Cazalet family in the 19th century. Major Peter Cazalet was a trainer of horses owned by the Queen Elizabeth The Queen Mother. Elizabeth was an occassional guest of Cazalet on the estate. The estate is currently owned by the Saudi Arabian Prince and horsebreeder Khalid ibn Abdullah.[1][2]


No sandwiches on offer at the Papermakers Arms....... "not on Sundays".........it's a familiar story nowadays.
That said, they did bring out a jug of iced water and seemed to be very friendly.

Tripadvisor rate them highly too :
http://www.tripadvisor.co.uk/Restaurant_Review-g3451189-d2414462-Reviews-The_Papermakers_Arms-Plaxtol_Kent_England.html

2pm departure and the real hills were just a few miles away.
I chose to go south of Sevenoaks eventually to reach Ide Hill but not before a humungous hill from Sevenoaks Weald over the A21 to Sevenoaks Common (Hubbards Hill).

The church at Tatsfield was a welcome sight on this the hottest of days and such was the heat we chose to stay indoors (no shade to be found).A shame because it affords great views of the weald.
Pot of tea and a piece of lemon drizzle £2.50.

Posted by Tartan Socks(long) at 21:02 No comments:

Having enjoyed elevenses at a new venue (Tillings, Gomshall, formerly a pub) on a warm, sunny morning seven of us set off briefly westwards, soon turning south into Goose Green. A climb up Queen Street, Burrows Lane and Lawbrook Lane avoided Peaslake and myriad mountain bikers and rewarded us with a swift descent of Pitch Hill leading to Ewhurst. Somersbury Lane led to Ellen's Green and Cox Green and soon we turned into Lynwick Street to incorporate a short stretch of the Downs Link. Emerging at Rudgwick we briefly used the A281 before rejoining lanes to The Blue Ship at The Haven. Good lunches were enjoyed in the uncrowded garden. 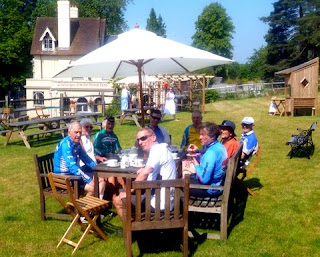 
The return trip kept mostly to the quiet, shady lanes via Slinfold, Broadbridge Heath, Warnham (using the tunnel under - the 'train approaching' warning was sounding but we didn't see/hear anything) and Clarks Green arriving at  Capel church at opening time - 3pm - what timing ! After a lengthy break we started splitting up depending on our destinations - I recorded just over forty miles but others will have done much more.

BARN DANCE 19/072013
FRIENDS AND FAMIY ARE I NVITED TO AN EARLY WAKE/BARN DANCE ON 19/07/2013 (SO I CAN ATTEND) TO MARK THREE SCORE YEARS AND TEN
AT CHRISTCHURCH HALL (NEXT TO CHURCH)
Christchurch Road Epsom Surrey KT198NE
AT 7.30
IT WILL BE AN AMERICAN SUPPER SO FOLK ARE INVITED
PLEASE TO BRING A SMALL PORTION OF FOOD FOR THE  BUFFET
TABLE AND THEIR OWN DRINK ALTHOUGH TEA AND COFFEE WILL BE PROVIDED IN INTERVAL
PRE RECORDED MUSIC AND A CALLER WILL BE IN ATTENDANCE
TO GUIDE US THROUGH TH DANCES
AT 10.30pm
THOSE WHO WISH CAN RETIRE TO THE
PUB  ACROSS THE COMMON
ALL PRESENTS GIFTS OR CARDS ARE STRICTLY PROHIBITED
(THEY CANNOT BE TAKEN TO MY NEXT LIFE,IF ANY!)
JUST BRING YOURSELVES AND HAVE A SUPER FUN TIME

On a roasting summer's day I was second last to Wetherspoons despite arriving by 0915!. Apart from the Editor, last year's riders all put in an appearance along with debs: Dave S, Keith, Paul, and Richard. Just after 1000 we were off leaving Bob to his own devices. From Shalford, we headed up through Munstead and past The Merry Harriers to rejoin last year's route near Shillinglee. Chris Evans's boarded up and forlorn looking Lickfold Arms signaled the start of THE climb with riders and walkers settling for a 4-all draw at the top. Then it was along the ridge and down the steep drop to the Duke of Cumberland, early so avoiding any crowds.

Suitably refreshed, the drop had to be reversed so there was more walking for some. But soon we were off the A286 searching for the Woolbeding Common viewpoint (so troublesome to locate on my recce due to over-confidence). On the short off-road section Janice took a tumble injuring only her pride.

Once upon a time a route through Litchmere and Hammer would have led only to the A3 but nowadays it goes under and so got us to Hindhead's NT cafe. We refueled on cakes before tackling the long and surprisingly quiet downhill to Thursley. After a  further descent to Elstead, the only remaining barriers were Farncombe Hill and Littleton meaning we were back in Guildford around 1630.

I'd lopped four miles off the route though it didn't feel any easier so  50 miles and 4000+ feet of climbing.
Posted by Anonymous at 10:22 No comments: