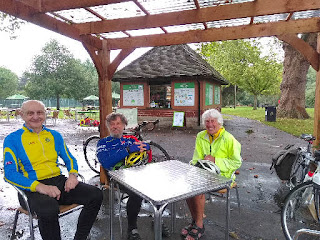 This is a ride and a route which will not be remembered for a long time! Dull all day with patchy rain; plenty of traffic.

Improving Met Office forecasts encouraged me to brave half marathoners on Kingston Bridge and enter Bushy Park where the rut (at least for roe deer) has started. In Hampton I passed Tony on his way home (he'd reported in sick). Beside the Shepperton Studios extension drizzle started though never enough for action. In Lammas Park Simon was seated under a covered pergola later to be joined by Pam and  Ray. As the rain increased we talked vaguely of Dorney, Black Park, etc. By 1140 the vote was go west or go home.

Wraysbury roads were dry(!) and Datchet's gridlocked with closed crossings. Approaching the playing fields of Eton, drizzle turned to rain so waterproofs were donned and lunch was switched to the Cinnamon Cafe Windsor. It was packed but with prompt service. Next door Cafe Rouge was almost empty.

After lunch we voted again go west; not the best as the obvious way led only to the top of a six storey car park well to the west of the station! Down we went followed by a traverse of the coach park - no problem with Windsor still well short of visitors. Datchet (busy), Old Windsor, across the meads to Egham and Staines bridge brought us to a final vote outside Notcutts - Nauticalia for tea reached via a right turn at Shepperton's fish stop. 45+ miles door to door