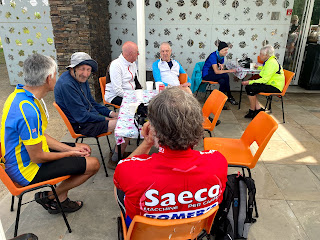 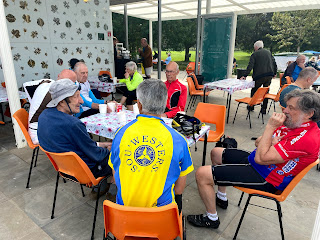 For what seemed like the first time in many weeks, a pleasant summer day was forecast!    Simon, Bob, Tony, Terry, Ed, Lilian, Maureen and I met for elevenses at Walton Bridge.   Ed, Maureen and Bob made their own ways from there, while the rest of us set off for Callow Hill.  We managed to lose Tony before even leaving the car park, which did not augur well, but fortunately caught up with him again at the other end of the path from Walton to Weybridge via Broadwater.

We bypassed Addlestone by Coxes Lock footbridge, then I showed the group the new route off the Addlestone to Chertsey cycle path which neatly avoids the railway footbridge.   Hardwick Lane was very busy with traffic but we were soon on quieter roads again, and, from Thorpe Green, embarked on a traffic-free, off-road route of several miles all the rest of the way to lunch.  The culmination of this was Hollow Lane, a bridleway from Stroude to Callow Hill.   None of us seemed ever to have done the first section before, and it is not easily forgotten - a shady, steeply sloping track with high-banked sides which winds its way precipitously up the thickly wooded hillside.  We bravely proved it is rideable on road bikes, but only just!

The Rose and Olive Branch, our lunch stop, was conveniently near the end of the track.  We lunched in the lovely, shady garden.   Food and service were both excellent, and a full menu, including filled baguettes, is available on Sundays, a rare thing these days! 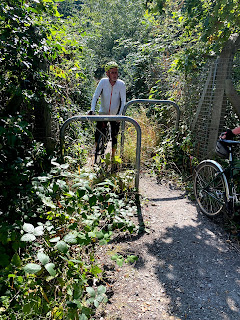 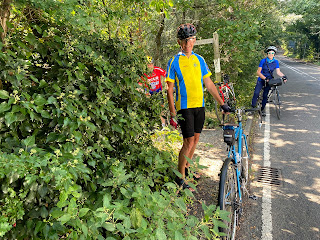 The sight of another inviting track winding downhill from the pub car park aroused our curiosity and the planned return route was duly amended.   As it goes with these things, it started off well but narrowed as it went along, and fallen trees and difficult to negotiate plank bridges began to proliferate.   What some would call a 'technical' route, I think!   By and by it became patently overgrown in places rather than 'technical', but it was gratifying that we eventually emerged, as planned, by Prune Hill level crossing, most of us bearing injuries sustained from nettles, brambles or worse!

The planned route had also included the Monks Walk track from Thorpe to Chertsey but somehow we had all had quite enough of off-roading for one Sunday, and an on-road route was quickly substituted!   Tea was at Shepperton Lock.    Thanks to all for your company and to Simon for back-marking.