I arrived at an overcast dew drenched Nauticalia to find Bob and Mark seated (but no Dave as previously announced). In time we were joined by Ed, Pam, Ray, Richard, Simon, Terry. We had no leader but I had a plan for something different. In truth parts had not been executed in years and lunch would reveal I had no maps!

Just five (me, Mark, Pam, Ray, Simon) headed off on a most familiar route (Shepperton High Street, Squires, Lower Sunbury, Hampton, Bushy Park) to cross the Thames at Teddington Lock. We climbed to Ham Cross, past the Pen Ponds cafe and out through Sheen Gate. The Ship at Mortlake (overshadowed  by the 10 year derelict "Watney" Brewery) was reached at 1245. Lunch was tasty if a tad tardy. 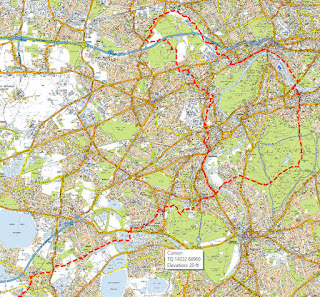 We were off by two leaving Mark to find his own way home. After Chiswick riverside took us to Brentford. At the end of the High Street a democratic vote was for an hour long detour along the Grand Union Canal. From the Waste Transfer Facility we made the 50+ ft climb beside the Hanwell Lock Flight to pause at Windmill Bridge where the canal crosses a railway and is crossed by a road.  We turned off at the next cobbled footbridge.

I knew our route was to our left but no more. And so it proved when we reached Norwood Green and the northern entrance of Osterley Park where tea was taken alfresco. Another senior moment occurred when I wrongly signalled first left after the Piccadilly Line. Across the A4 we took the first left and all was well! From Isleworth station we continued  to Old Isleworth. Alone I might have taken to the riverside for Richmond - not a great option at weekends. But Simon knew of the C40 cycle route (brand new, not even in Wikipedia). For us it paralleled the busy A309 and quietish roads brought us to Twickenham station. Here Simon turned right for home; later on Pam and Ray turned right at Pope's Grove; for me it was a second crossing of Teddington Lock and a first glimpse of sunlight. Home by 1630 and around 30 miles.