My hoped for early start was not to be as Robert was over from Canada to collect two cycle tops, an order placed with Pam over two years ago! He arrived around 1045 in Staines just as the crowds were assembling across the road from the George. 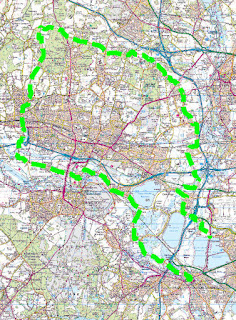 In contrast the crowds were dispersing as we rode through Datchet and Eton so little time was lost. The route was an obvious choice - a clockwise circuit of Slough(see map). There was plenty of autumnal colours on the western edge of Burnham Beeches but few other visitors. The en route lunch stop was the Fox and Pheasant just ahead of a small group of Uxbridge Loiterers who knew Tony. Here Dave left for home. Pinewood came next followed by the Ivers. We reversed last week's route past the sewage works and incinerator and into Colnbrook. Don't be surprised if more concrete blocks appear around junction 14 as the "bikers" were out in force.

In Stanwell Moor Pam headed off south to inspect the "improved" Crooked Billet roundabout where the underpass has disappeared! Robert and I went southeast; our ways separating in Bushy Park. Home around four and after 60 miles.  So two points for me, Dave, Pam and Robert, one for Ed, Lillian and Tony.

The North West Frontier (Of Burnham Beeches) courtesy of Pam and Robert.
Posted by RaasayWarden at 07:34