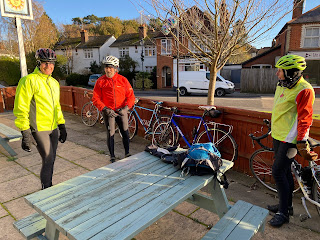 It was the coldest start for some time and temperatures were not expected to rise much during the day, so it was not entirely surprising that only Simon, Graham, Keith, Pam and I were tempted out to elevenses at the Bourne Valley Garden Centre.    We have had better experiences at Bourne Valley GC, perhaps they were having a bad day!

When we eventually re-emerged it felt almost pleasant in the sunshine and shelter outside the garden centre, but the wind chill hit us as soon we set off for Windlesham (Keith made his own way home).   The stiff climb up to Row Town soon got us warmed up again, and we kept up a steady pace on yet another quirky route of mine!    The piece de resistance this time was a back roads route we have not ridden before between Bisley and Donkey Town.  I say 'roads' but one stretch turned out to be rather less than fully surfaced, although it was just about possible to avoid any mud.

We arrived at The Sun at Windlesham at 1.00 pm and spent a pleasant hour over lunch.  Then it was a straightforward route home towards Addlestone.   By now it was distinctly cooler and the first signs of dusk were appearing, so no one wanted to stop for tea and we all made our separate ways home from Stonehill.   Thanks to all for your company.